Gaslighting is a colloquial term created in reference to the theatrical adaptation of a play, Gas Light, to a film starring Ingmar Bergman called Gaslight. The plot involves a a husband who tries to make his wife think she’s nuts. Today, the term “gaslighting” has been created to refer to relationship dynamics where one person feels that another in the relationship is doing the same thing. 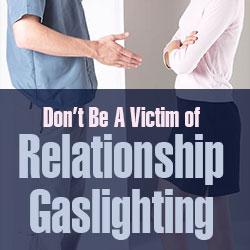 If you’re in a relationship and you feel that someone is trying to alter your reality, the first thing you have to understand is that this can only happen when there is the opportunity. So decide how you’ve given someone the opportunity to convince you of a reality that doesn’t feel completely real to you.

Next, give yourself some space from that person. Healthy boundaries are a great tool in any relationship because they give you time and space to check in with yourself and regroup and nurture yourself. So set up boundaries for yourself and respect them.

Learn to say, “Let me give that some thought,” as a response to decisions you’re being asked to make, that you’re not one percent sure about. By saying, “Let me give that some thought and I’ll get back to you,” you’re giving yourself the time and space to consider not just what’s at hand, but the perspective surrounding the request, the relationship and possible outcomes of your decision. Lack of perspective is unhealthy and promotes unhealthy behavior. Perspective is a goal to strive for.

And lastly, take a clear look at the worst case scenario. Many times people act because of what they think will happen if they don’t, not what will happen if they do. In doing this, they tend to spin out and skip steps in the chain of logic that should be the roadmap to a worst case scenario — and paths to take to avoid that. They turn into a storm of negativity. If people can articulate the bottom line in a worst case scenario, they have the opportunity to take the power away from the fear that is driving them to make poor decisions. In other words, simply saying, if I don’t do this, this will happen, allows people to weigh the outcomes, clearly. Will you die if you’re late to dinner with his family? No. So don’t treat the possible tardiness as life and death. Feel yourself breathing more clearly already?