American dating rituals before the 1900s After the Puritans set their sails, and landed in America, they established vigorous religious principles. Marriage between a man and woman during this era was seen more as a business deal instead of a loving commitment. Men brought security and wealth to the table, and women brought their dowries and the ability to produce children. … END_OF_DOCUMENT_TOKEN_TO_BE_REPLACED 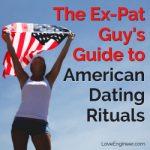 How to Master Dating American Women American dating rituals can keep a lot of surprises in store for the unsuspecting ex-pat, even one who was successful with women in his own country. This culture shock will manifest itself in american women taking some unexpected actions in their interactions with men. IMOP (I Made Other Plans) When you have been IMOPed, it's usually … END_OF_DOCUMENT_TOKEN_TO_BE_REPLACED