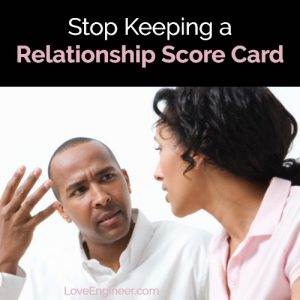 The big issue most men face became clear to me one day when I was counseling a 40-something couple. The husband was arguing that his wife needed to “put up or shut up” (yes, he was an intelligent man, but he was feeling frustrated and upset about his lack of sex life). He kept saying to me, “It’s tit for tat, it’s tit for tat – she needs to understand that. She acts nice to me and I’ll be nice back. She does things for me and I’ll do the things she asks.”

A light bulb went off in my head as I realized that so many of the men I’ve worked with have felt something like this. You guys tend to grow up playing sports and being socialized to be competitive. This mindset has leaked over into your relationships and you end up keeping score. Your relationship isn’t a competition or a game. If you’re keeping score, you’re going to lose.

It’s not tit for tat in a relationship, it’s tat for tit. If you want to have regular (and great) sex, and be close and intimate with your woman, you need to be the first to give. In general, men like to have sex to feel close, but women need to feel close to have sex. How do we feel close to you? When you say out loud that you appreciate us, when you let us know what you’re thinking and feeling and when you follow up with consistent action. It’s not about “being nice to get sex” but it is about making your partner a priority, on a daily basis.

Waiting for your partner to act a certain way, so that you’ll act a certain way, keeps everyone stuck. You’re waiting for her and she’s waiting for you. I call this “Relationship Gridlock” because you end up trapped in a miserable stalemate. If you want to have a more appreciative partner, then you need to be more appreciative. Wish your girlfriend would be more patient? You be more patient. Whatever it is you want to see in your relationship, start acting that way first!

The complaint I hear from the men I work with is: “But what if she takes advantage of me? What if I do all these nice things and she doesn’t do anything for me?” I’ve got two things to say to this objection:

Number one: If you think you’re going to be taken advantage of, it means you don’t trust your partner. She’s picking up on this distrust, which leads to her not feeling close to you, which leads to a dismal sex life and overall discontent (on both sides). You can’t build a close relationship based on distrust. You’ve got to make that first (gulp) vulnerable move.

Number two: No, she won’t take advantage of you because women really aren’t looking to do that unless you’ve got yourself a mean, selfish one (at this point I’d ask why you’re in a relationship with a person like that?). Your partner might be suspicious or hesitant at first (thus slower to respond than you’d like). Given time, you’ll find that as you act nicer so will she! I’ve seen it literally thousands of times over the last 30 years I’ve been working with couples. As you lead with more kindness, patience, love and compassion, you’ll get it back from her in spades.

Don’t be afraid to put out the love first! Someone needs to blaze this trail: be a leader in your relationship.

Here’s the catch: I don’t want you to buy her anything. Buying flowers is nice but the vast majority of women I’ve worked with see this as a cop-out because no thought is required, so the gesture doesn’t feel connecting.

There’s no need to go for anything big here. It could be filling her gas tank when you borrow her car, helping put away the groceries without being asked or making that doctor’s appointment for yourself that she’s been nagging you about for two months – you get the idea.

It’s this kind of attention that women crave and makes us very amenable in the bedroom and elsewhere. Now, I’m not saying that you guys only want sex and that everything should be a manipulation for sex. I’m saying that a happy home life is about giving first and creating that closeness that women (and you) crave. What you’ll find on the other side aren’t just orgasms, but a happy partner who is now looking to do things for you.

Abby Medcalf is a psychologist, author and speaker who has helped thousands of people create happy, connected relationships. With her unique background in both business and counseling, she brings a fresh, effective perspective to relationships. With over 30 years of experience, Abby is a recognized authority and sought-after speaker at organizations such as Google, AT&T, American Airlines, Kaiser, PG&E, Apple and Chevron. She’s been a featured expert on CBS and ABC news, and has been a contributor to Huff Post, Your Tango and Mt. Diablo Magazine. She is the author of the #1 Amazon best-selling book, “Be Happily Married, Even if Your Partner Won’t Do a Thing,” and the host of the top-rated “Relationships Made Easy” Podcast.