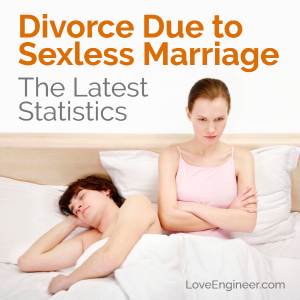 How long has it been since you last had intimacy with your spouse? Was it last week? Last month? Or last year?

This brings us to the question, how many sexless marriages end in divorce? What are the latest statistics? If you are in a sexless marriage and are wondering about these questions, then keep reading for the answer.

Sadly, sexless marriages are more common than most people realize. According to another study done by the sociology department at Georgia University, 15% to 20% of couples in America have not had sex within the past year. This could very well contribute to the 50% of marriages that end in divorce in America. Lack of intimacy can lead to affairs, and resentment. Sexual intimacy is not the most important thing in a marriage, but it helps couples connect on a deeper, primal level. As was mentioned above, couples who have sexual intimacy once a week or more are happier.

There are many reasons why a sexless marriage can lead to a divorce. One of the main reasons is the lack of. When intimacy disappears from a marriage, it leaves the one spouse who wants intimacy feeling unattractive, unwanted and rejected. By not having intimacy, you lose out on the emotional connection that helps two people feel closer to one another. This could then lead to a breakdown in communication, which in turn can make spouses feel like roommates. This disconnect that can snowball as a result of the absence of intimacy greatly raises the chances of one of the spouses having an affair. Adultery is one of the biggest reasons that couples get divorced. According to Denise A. Donnelly, associate professor of sociology at Georgia State University, who studies sexless marriages in America, couples in sexless marriages considered divorce much more than couples who had intimacy regularly. She also mentions how a lack of sex in a marriage could mean that all intimacy in the marriage is over. https://well.blogs.nytimes.com/2009/06/03/when-sex-leaves-the-marriage/

Sexual intimacy seems to be a good indication of the health of a marriage. When intimacy leaves a marriage it could very well mean that there are deeper issues between the couple.

It is interesting to note that “sexless marriages” are googled more than “unhappy marriages.” This confirms that sexless marriages are a real problem for many couples, and quite possibly even the biggest problem for some. Unfortunately, it is impossible to know the exact statistics for how many divorces occur due to sexless marriages because many couples don’t talk about this issue. They could be embarrassed, and therefore do not mention it as a reason for their actual divorce.

If you are in a sexless marriage, you might be wondering if your marriage can survive. According to a recent poll, 61% of couples believe that intimacy is extremely important in a marriage. This is because intimacy is what separates romantic relationships from friendships. So what about the other 39% of couples? How do they get along without intimacy?

2. One partner has temporary health issues
Sometimes couples can make it through a sexless marriage if there are temporary health issues. For example cancer, depression, childbirth, and high blood pressure. Often, once these issues have been addressed, sexual desire goes back to normal. If these issues are longer-lasting, then couples need to be open and talk to each other. Sometimes there are other ways to create intimacy in a marriage.

3. Both partners are asexual
Those who are asexual have no desire for sex. So there could be some couples out there who are asexual, and therefore are happy with being married to their best friend without the involvement of sex.

Sexless marriages can end in divorce when both spouses are not on the same page. For example, if one has a high libido and the other doesn’t, then this can cause major problems in a marriage. As mentioned above when one spouse tries to initiate intimacy, and the other rejects their partner, this can lead to hurt feelings. Built-up over time, this can lead to feelings of resentment. The partner with the lower libido might get annoyed with the partner who wants sex and shame them. This then becomes a vicious cycle, which will not end well.

To understand the cause of a sexless marriage, you will need to take a deeper look at your marriage. Is there no sex because of constant arguing? Criticism? Or from a break in trust? When a couple grows apart, the desire for sex within the marriage lessens as well. So that the emotional connection is not lost, it is important for couples to always keep communication open. Often when couples don’t talk, this leads to deep-seated issues. Couples need to look inside themselves and talk about any deep-rooted issues. They need to speak about their desires, wants and needs. And both partners need to listen. If they don’t, then their sexless marriage will lead to divorce.

If you are in a sexless marriage, and you can’t take it anymore, consider seeing a sex therapist together. They can help you figure out why you and your spouse are having sexual issues. Before considering getting divorced, try to see if you can make things work. A therapist might be able to help you break down walls and open up to one another. When communication is better, then the chances of having intimacy starts to increase. A therapist will see both points of view and offer helpful suggestions.

Michaela Strydom is a certified divorce coach and therapist, who has mediated more than 300 divorce and other family law cases. Since 2015, she provides divorce recovery counseling and professional emotional support for men and women thinking about the termination of a marriage or needs help in rebuilding and navigating life after a divorce.