How to Master Dating American Women 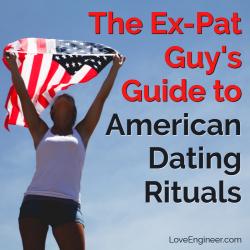 American dating rituals can keep a lot of surprises in store for the unsuspecting ex-pat, even one who was successful with women in his own country. This culture shock will manifest itself in american women taking some unexpected actions in their interactions with men.

IMOP (I Made Other Plans)

When you have been IMOPed, it’s usually when you are trying to firm up some tentative plans that were made previously. Typically you will agree with the girl to set aside some time in each other’s calendars to spend some time together. The date and an approximate time are agreed. You also agree that the specific time, location and activity will be confirmed later when you call closer to the agreed time.

You then call closer to the agreed time, and are shocked at the audacity of the girl saying “Oh I didn’t hear from you, so I made other plans.”

Your first instinct is to say, “but you did hear from me, we agreed to meet at the date and time specified, now here I am calling as promised to get the details sorted.”

Despite feeling like you have been insulted, arguing with her using logic is pointless. From her point of view, you left it too close to the date to call her. There was a time at which she was expecting you to call, and once that time had passed, she made the following assumptions:

Her canceling the date is a deliberate rebuke designed to show you that she has a veto over any decision made in the relationship, and that she is willing to sacrifice your time with her if you do not comply with her requirements.

From your perspective, you are probably wondering the following:

“How on Earth was I supposed to know exactly when to call?”

American women have a different idea of making plans than people in other countries. Planning is carried out much further ahead, and once a plan is made it is written in stone, with the exception that she reserves the right to change the plan.

Knowing when to call (Tc) is also fraught with dangers, since calling too soon can make it sound like you’re too keen and therefore a desperate loser, and calling too late can get you IMOPed. As a rule of thumb, take the time between when the tentative arrangement was made (Ta), and the time when the date was scheduled for (Td), and find the halfway mark between them. That is your optimum time to call. Therefore Tc=Td-((Td-Ta)/2).

“Why would she assume I was canceling the date?”

American culture has women on a pedestal while men are portrayed as dishonest, unfaithful, untrustworthy, and only interested in sex. The accuracy or otherwise of that perception is beyond the scope of this article, but the culture of cynicism that it has spawned is so widespread that honest men who make innocent little slip-ups find themselves having to apologize for their actions that are interpreted as deliberate acts of anti-female behavior. If you have been IMOPed, it is likely that she assumed the worst about you and tarred you with the same brush as all the dishonest american men she either dated previously or heard reports about from her friends or on TV talk shows with female-dominated audiences. It’s nothing personal, so it is best not to take it as such.

“If she had her doubts about whether or not the date was still on, why didn’t she just call and ask?”

American dating culture is averse to women calling men. Women are conditioned into having what borders on a phobia about it. In her mind, the man is supposed to pursue her, and for her to call you is to make her sound desperate and compromise her status as a strong and independent woman. Furthermore, american women expect to be able to page men telepathically (see next section). You should never expect an American woman to call you, even if she said that she would.

Paging someone by conventional means involves calling them, getting a recorded message, and pressing a button that triggers a message on the person’s phone asking them to call you back.

Paging someone telepathically is where an American woman will decide that you are supposed to call her at a given time, but she will not tell you this. Instead she will expect you to somehow know that you are meant to call her. When you fail to get this telepathic message, this triggers a negative reaction in her that takes the following forms in ascending order of seriousness:

Calculating Tc when there is a Ta and Td present is relatively straightforward. However, there are other times during dating that you will be paged telepathically, and knowing when it is is something that cannot be broken down into a formula. It varies from woman to woman. Some women have specific rules about it, and if you are lucky she will let you know what they are, but in general it will be after you have missed at least one telepathic page. This will usually be enough to give you an idea, and as you get to know the woman better you will be able to judge when you need to call.

The need to be spontaneously contacted is a trait that derives from primitive societies. The female needs to know that her partner will always be around and will come looking for her when she needs him even if she is incapacitated and is unable to contact him.

Like tipping in restaurants, the etiquette of who pays for what in American dating has enough pitfalls for non-Americans to fill an entire season of Seinfeld.

If you invite a girl out on a first date that involves spending money, it’s customary for you to pay. If you keep going on dates with the same girl, you may gradually increase the amount she pays until you end up going Dutch. This provides a good financial incentive for you to make your dates successful, since there are women who deliberately go on dates with no intention of getting into a relationship with the man, but see it as entertainment and free dinner. A string of first dates can be expensive, which perhaps explains the popularity of the coffee date which is more affordable than a large meal. If you find that you are falling victim to so-called dinner whores, you may prefer to switch to activity dates where there is less expense involved and the entertainment is provided by what you’re doing as opposed to what you’re buying, which is a richer dating experience in general anyway.

Spending some amount of money on her is the modern version of showing your value to a female. In simpler times you would convey your value as a mate by catching some food and bringing it home for her. It telegraphs that you have the food-gathering capabilities necessary to support her and any children you would have with her. Modern material goods can subconsciously convey the same message, but you only have to do it once. If you do it too much, it will become expensive for you and will make her think you are trying to buy her affection with a substitute for the other qualities required in a mate.

At some stage in the courtship, an American women will expect you to pick her up in your car. This may not apply if you live in a high density city where people get around predominantly on foot using mass transit and car ownership is low, but even in that case it may be beneficial to pick her up in a cab at least once in order to give her the same psychological reassurance that you have the resources to ferry her around.

Her need for this is derived from a need to know that a potential mate is mobile and would be capable of moving her and the children around when the need arises.

Dating America Women can be a lot of fun once you have mastered it.
Practice will make it easier, but you should not expect better results overnight.

The article is dedicated to all the American Women who came into my life while living in Silicon Valley and San Francisco :)