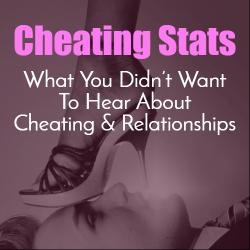 Who hasn’t dated someone who has  been caught cheating? Before you think it only happens to you read this.

What the Therapists Say  about Cheating– Two Different Opinions

Approximately 40% of men seek sexual satisfaction outside their relationships, estimates Kat Hertlein, Ph.D., professor of human development at the University of Nevada – Las Vegas and a marriage and family therapist.

About 60 percent of men and 40 percent of women will have an affair at some point in some marriage “Monogamy Myth”, Therapist Peggy Vaugn

What Government Studies Says About Cheating

That number hasn’t changed much since 1950, when the famous Kinsey sex study found that 50% of U.S. men cheat at some point in their marriages.

Who Admits to Cheating – Men Versus Women

According to Men’s Health Best Life 2003 study on 5% of men admit they are cheating. Which leaves 35% denying it.

Rise in Cheating Women – They Are Catching Up to Men Standards

As women become more financially independent, women are starting to act more like men with respect to infidelity

I Will Never Get Caught Cheating– Think Again.

If you are male don’t think you will get caught because 80% of you will according to Divorce Peers Study.

Why Did You Do It?  Weren’t You Rationally Thinking?

The initial decision to be unfaithful is rarely ever a rational choice; instead infidelity is usually driven by circumstances and one’s emotions. In fact, most people are surprised by their own behavior at the start of an affair

Does Age Matter When it Comes to Cheating?

Younger people are more likely candidates; in fact, younger women are as likely as younger men to be unfaithful. According to Wallstreet Journal Study Infidelity is becoming more common among people under 30. Many experts believe this increase in cheating is due to greater opportunity (time spent away from a spouse) and young people developing the habit of having multiple sexual partners before they get married 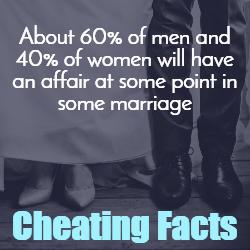 Can a Marriage Be Saved After One Cheats?

The good thing 64% of couples preserves their marriage after an affair. However 78% of couples who remain married despite the affair later describe the marriage as unhappy and empty – Study Divorce Peers

Lower Then You Think

17 percent of divorces in the United States are caused by infidelity.

Who Is Your Daddy?

Research consistently shows that 2 to 3% of all children are the product of infidelity. And most of these children are unknowingly raised by men who are not their biological fathers. DNA testing is finally making it easy for people to check the paternity of their children

50 percent of Americans say President Clinton’s adultery makes his moral standard “about the same as the average married man,” according to a Time-CNN poll.

This article is dedicated to the man who cheated on me while I was at my grandmothers funeral. At the end his cheating was a blessing.