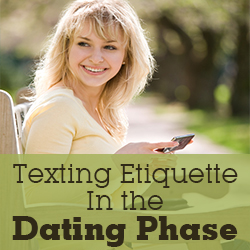 Texting has changed relationships—and not for the better.  I’m not a fan of rules but I do feel there needs to be one big bold rule about text messaging:  NEVER send a text message to communicate emotions or feelings!

Good communication is the foundation of a happy relationship. Texting is impersonal communication.  It is unbelievable to me that anyone would attempt to communicate relationship altering information via a text.  But it happens all the time.  Clients have told me they have said I love you for the first time, agreed to be exclusive, held entire arguments and even broken up without speaking a single word to each other.  I hope it’s not just me who views that as crazy.

I also think it is cowardly to initiate a date via text.  I do understand the appeal for the sender; there is no pressure on what to say if you’re turned down.  But as a woman, if a man doesn’t think enough of me to pick up the phone and speak with me then I’m not interested…and I hope to empower all women to feel that way.  You teach people how to treat you. So when you first meet someone set a boundary that you want to communicate verbally.  If a potential love interest texts instead of calling, text back, “Call me.”  If they don’t, they may have saved you from future heartache.

How long should you wait before responding to a text or phone call? The answer is, don’t wait. The idea that you have to play hard-to-get is junk-food. If you begin a relationship by playing games of any kind, you will ultimately lose. A person who is looking for a healthy relationship wants someone who is communicative. Having said that, ladies, let the man initiate all texts until you are in an exclusive relationship. If he takes you out you can thank him verbally at the end of the date.  There is no need to thank him again with a text the next day—that’s his role.

I strongly believe men are responsible for initiating communication. One of my male clients recently called because he hadn’t heard from the girl he’d just spent the night with. He was confused as to whether she liked him or not. I asked if he had called or texted her. “No,” he said, “I was waiting to hear from her first.” “She’s waiting to hear from you,” I said. “You’re the guy.” He had no idea that he should make the first contact. I realize today’s women are not exactly traditional, and many of them do make the first contact. I also know men now often give women their card and say “call me” instead of asking for their number. But that makes the woman the pursuer. Men, unless you want a masculine energy woman who will always take the lead, be the man by taking the traditional lead in communication.

Here are my suggestions for texting  during the dating phase:

• Don’t use text or e-mail as a replacement for phone calls. One-on-one communication is best. Don’t schedule all your dates through texts.

• Just because you can send a message immediately doesn’t mean you deserve an immediate response.

• Never e-mail or text when you’re impaired: angry, sad, or otherwise emotional, or under the influence of any substance.

• If you wouldn’t deliver your message in person, then don’t send it via text or e-mail. Remember, the receiver has feelings, too (even if he or she is not good at showing them).

• Don’t hide behind texts. It’s really easy to type out what you want and just hit send. But that won’t get you the kind of response you need, and it gives the receiver permission to do the same.

• Anything that will potentially alter your relationship needs to be done in person or at least speaking on the phone.

• Only send a text if it will positively benefit your relationship and it cannot be misconstrued, such as messages stating that you’re running late or communicating other logistical information.

• The man should be the pursuer. Ladies, don’t send texts to initiate contact.

The problem with any written communication is that its context can be misconstrued. Without the inflection of voice to help interpret its meaning, you may take what is written the wrong way. So may the receiver of your texts. One’s perception is one’s reality. Your relationship is too important to leave up to chance.  Too many very smart people succumb to the self-defeating act of texting their lover in a moment of emotional insecurity, frequently when they are tipsy or drunk, forgoing any rational judgment. The lure to instantly deliver your deepest feelings—positive or negative—may feel satisfying in the moment, but the consequences of pressing the send button are rarely beneficial.