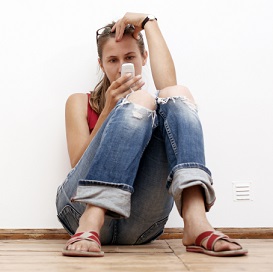 Call me unfashionable, but text message etiquette when dating has become annoying if not rude.  Texting has its’ social place in our colorful culture, but I found myself on the receiving end of an offensive text message, prompting me to ask if my perspective of inappropriate texting is shared by others.   I created a few text message rules from texting stories I heard from singles of diverse nationalities.  Am I being too harsh?

He kissed me the night before my accident.  His body language was all about taking me home.  Instead, I dropped him off at his car and said goodnight with a peck on the lips.  The next morning, I was in an accident involving a horse, a canyon, a cavaletti, and a metal pole.  During brief moments of shock and consciousness, I managed to inform him by telephone I had a head injury and I was hospitalized.  He later sent a text message asking me if my head injury was serious.  Need I explain why his message was not cool?

Sleep was not part of their agenda – they had amazing first-time sex until sunrise.  At rush hour, they split to tend their respective duties.  Chelsea didn’t hear from Richard until late that night when he finally sent an unemotional, “Hi, how was your day?  I’ve been going non-stop with no sleep.  So tired.”  A two-minute telephone call would have more adequately left Chelsea feeling appreciated for the night before.

Robert wanted to discuss Nadia’s unplanned pregnancy by text.  “I don’t want to be tied to you for life,” he wrote, “You can’t have this baby.”  Do you feel the frost?

Michael sent a text at midnight saying, “I saw you accepted a friend on Facebook at midnight, so you were awake.”  Considering this a subject worthy of an in-person discussion, Annie didn’t respond.

“Hi Jason.  I haven’t talked to you for a while.  How are you doing?”  Did Marla really want to know how Jason was doing?  If so, how did she expect him to summarize his life in 160 characters or less?

“Sorry Mark…something came up and I can’t make it to dinner tonight – Debbie.”  Seriously, if you must cancel a date, provide the person with the civility of a phone call and proper explanation – even if your explanation is a white lie to spare their feelings.

Text messages designed to engage me in a lengthy exchange usually receive no response.  The best text messages to send transmit useful information, such as:

“I’ll be there in five minutes.”

Have you received or sent a text message when a telephone call was more appropriate?  Do tell…your story may make the rest of us feel a bit better.

Carisa Carlton (carisacarlton.com) While most people look at life’s straight lines, its height and depth and width, she’s bending the lines with her imagination and turning black and white into shades of blue and yellow. She can, if she must, think in conventional ways. But left on her own, she’ll usually opt for the eccentric or avant-garde. “Do you ever stop thinking,” is the question most frequently posed to the artist and writer. Located in Orange County, California, Carisa spends her days shuffling words, brainstorming, researching, and dreaming of new ways to shape our culture. Connect with Carisa on Google+