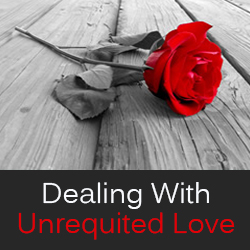 This article is written for anyone suffering from the agony of unrequited love, or one-way love, where you are fixated on a person (the target) whom you may have thought was interested in a relationship, but you have somehow discovered that they are not.

Pain results from having built up a picture in your mind of what life would have been like had you succeeded in getting into a relationship with the target, and recognizing that this is not really going to happen. The greater the gap between reality and the expectation, the greater the pain. You may have false memories of things that never happened, since your mind spent so much time concocting these scenarios that it cannot tell the difference between them and real memories.

This leads to a similar pain to that which is experienced after having been dumped by someone with whom you were in a loving relationship. This is an evolutionary mechanism that incentivizes people to stay as part of a bonded pair for the purpose of raising children. The instinct is to remain as a stable couple for the benefit of the children. If you feel that this pair bond has been unduly broken, your evolutionary instinct is to try to repair it, and failing to do so is punished by emotional pain. You have these instincts because you are the descendants of people who also had it. People who didn’t have it? Well, they have no descendants.

Emotional pain is not your fault. It is a side-effect of the forces of nature that reward any traits that improve reproductive fitness by keeping them in the gene pool.

In the case of unrequited love, the emotional pain is the result of a pair bond that has been broken in your mind, but never existed in reality.

Dealing with the phenomenon of unrequited love can be broken down into a few phases.

The reality is painful to deal with, as is evidenced by the way you feel when you wake in the morning. While you are still groggy, you have a few seconds of peace until you remember the reality of your situation and the pain resumes.

It can be tempting to periodically ‘switch off’ your belief in the dark reality of your situation and refuse to accept it. This is because you are still in the love zone, where thinking about the target and the great future you thought you had together still gives you the warm and fuzzy feeling. If you use this as a means of lessening the pain, then you are going down a dangerous path.

Reality will come to the surface in the end whether you like it or not. If you fantasize about succeeding with the target, then you are wasting precious time in a fantasy world. The more time you spend there, the more painful it will be each time you come out of it and reality reasserts itself. It is therefore easier in the long run to spend as little time as possible in the fantasy belief, and spend more time accepting the reality that the target is not interested.

2 – Remove yourself from the situation

Being in the presence of the target, or even looking at pictures or representations of the target, can be painful. Avoiding the target in every way possible will help to lessen your attachment to them. If it is someone that you haven’t known for very long, it is surprising how quickly you can actually forget about details of the person’s appearance just by avoiding looking at them for as little as a few days.

If it is a person who lives in your home, avoid the home for a few days. Sleep on your friends’ couches or get a motel room if you have to. If you are friends with them on a social networking website that you frequent, remove them from your friends so that you don’t have to look at them or see what they are doing.

3 – Don’t fear future pain that may not be real

One of the forces that keeps a pair bond in place is fear of what would happen were it broken. Much of the pain of unrequited love is based on a realization that you are now in a situation that you were afraid of previously. You were thinking that you would be in bad shape if the relationship didn’t materialize, then when it didn’t materialize you felt obliged to be in pain so as to fulfill the prophesy you had concocted. But when you actually examine the amount of pain you are in, you might find that it is much less than you were expecting.

Human contact is essential in dealing with any crisis. In this crisis, it is doubly important that you have the support of family or friends. A sure way to increase pain is to sit around doing nothing but think about how bad your situation is. When in company, people will be having conversations about other things, and through social etiquette you will be compelled to participate. This will engage your mind in subjects other than your situation, and this reduces the pain by taking your mind off it.

Further, maintaining contact with your social networks that are not connected to the target will help to reinforce any sensation of not depending on the target for all of your social needs. If you believe that the target was your only friend in the world and you needed them, you are in trouble. If you don’t have any friends other than the target, then you have to get some by means such as joining a club, taking up a new sport, or any means that will enlarge and diversify your portfolio of friends.

Staying sociable will also help you to move in circles where you will be able to meet potential future romantic interests. Even if you are not interested in them now, it will be comforting to know that they exist and that the target is not the only potential mate in the world. This information may sink in at a conscious or subconscious level.

A healthy body and a healthy mind go hand in hand. Exercise has many positive effects that go beyond physiological benefits. If you are embarking on a new exercise regimen, the first few sessions may be uncomfortable, but the benefits can become apparent as your muscles ease into it. A feeling of well being, known as ‘jogger’s high,’ can last for as long as several days depending on the intensity and duration of a workout. This is caused by the release of substances called endorphins in your brain, the same that are released in a short but intense burst during orgasm. Exercise causes them to be released more slowly over a longer period. Cardiovascular exercise in particular can produce significant releases of endorphins.

If you are significantly out of shape, consult a physician before starting an exercise program.

6 – Think of the target’s negative qualities

Nobody in this world is perfect, the target included. Think of their negative qualities and remind yourself about them. Write them down if it helps, but be careful about placing them in a prominent place. That might remind you of the target at times when you would otherwise would not be thinking about them.

7 – Keep your life on track

Watch your finances as usual, continue to pay your bills on time, and stay productive at work. Do not allow a short term emotional crisis to produce long term negative consequences.

None of these measures on their own will completely and instantly eclipse the pain of unrequited love, but in combination they can be very effective in significantly reducing it to manageable levels.

As time wears on, the pain will be reduced until eventually it all but disappears. If followed correctly, the process can take as little as a few days. As with physical injuries that take time to heal, there will always be a little scar where the injury was. This acts both as a visible reminder to avoid a similar accident, and as a reinforcement of previously vulnerable tissue.

You can connect with her on Google+ by clicking here